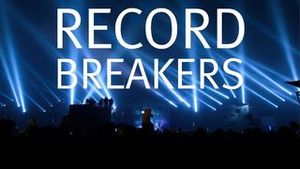 Last week, in case you hadn’t heard, EMC launched a record 41 products. You can view the Record Breakers simulcast replay on EMC.com, if you’d like. But, I’m not here to talk to you too much about the product side of things – I’m no product expert although I think that there are some awesome new products out there from EMC. Instead, I’d like to talk to you about the social media side of things that went very well, and that I’m extremely proud of. It’s also a demonstration of how well things can go when you have the passion and drive to move them forward, budget or no budget.

How things came together

First off, we started out with a direct mailer of “broken record puzzles” to key folks around the industry. The feedback was positive on these, and the intent was twofold – 1) Invite them personally to the Record Breaking event on January 18th, and 2) Encourage them to tell others about it in the hopes that their networks would also be interested in the event and accompanying announcements – this is WOM (word of mouth) marketing at its best! (Photos courtesy of Michael Cote) 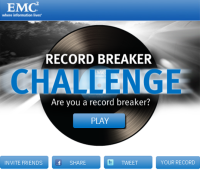 Close on the heels of the puzzle, we launched a nifty little Facebook game to drive awareness and encourage fans (yes, I still call them fans!) to break their own records! It’s still up there if you’d like to give it a whirl. Warning: It’s rather addictive!

At the same time, we launched a couple of viral videos on EMC’s YouTube channel, which have accumulated over 700,000 views between the two of them, and successfully drove registration to the EMC event.

All this time, we were also tweeting about the event using a common hashtag - #EMCBreaksRecords - to drive awareness, registration and buzz. We were sharing the videos, making folks aware of the game, and also tweeting world records that had been previously broken – asking them in the form of questions in the morning to gain responses, and giving the answer at the end of the day.

I should also mention a practice that has worked very well for us to keep EMC employees around the globe in the loop of our activities in the social space, as well as enable them to join in on the activities in a consistent and measurable fashion – “social media activation kits.” These kits contain a high level overview of the program at hand, as well as links to content and collateral (both traditional and social), tracking links, hashtags, suggested tweets/posts, social hubs and just about anything else you can imagine to participate in a truly organized social marketing campaign. These are hosted the internal employee community that I used to manage, EMC|ONE – now thoughtfully managed and curated by our own community manager extraordinaire, Michelle Lavoie. Michelle was kind enough to host a front and center widget on the home page to drive further awareness of the activation kit, as well as the overall social media plan for the launch.

The tweeting continued around things that were going on during the simulcast – EMC actually arranged to break a couple of world records with the folks at Guinness during the event. I’ve shared the videos of each within this post – check them out.

The tweeting during the event also resulted in EMC’s first ever trending topic on Twitter across the entire United States. Last may, we reached trending in Boston for EMC World 2010 – but this is the first U.S.-wide achievement – so you could say we set a record in social media, as well!

Also, for the first time ever, we held a live Q&A session within our own EMC Community Network. Envisioned and championed by the folks on the ECN team – this was the company’s first ever live simultaneous Q&A session – so another record for us, in a matter of speaking!

Also, the day of launch, our super stellar EMC Blogroll of subject matter experts along with other industry folks produced over 40 blog posts released on the day of the launch, further generating buzz, awareness and affinity for the EMC brand.

So what does all of this mean?

Well, at the end of the day, it means that social media engagement played a critical role in generating awareness and buzz about EMC’s most important and most impactful launch!! Here are a few key statistics and milestones:

With all that activity and success, you might be wondering what’s next – how will we keep the momentum going?

The EMC Record Breaking Tour, of course! You’ll be able to follow the tour drivers around the world as they make stops, break records, and demo all the latest and greatest from EMC! You can follow the drivers on the Twitter account we set up for them, and keep an eye out for the Record Breaking Tour blog coming soon! There will also be Facebook components, and an invite to all EMC customers, partners, and enthusiasts to share their own record breaking moments!

I’m looking forward to seeing what this next chapter holds!