Mixed Feelings on The Social Network : A Movie Review 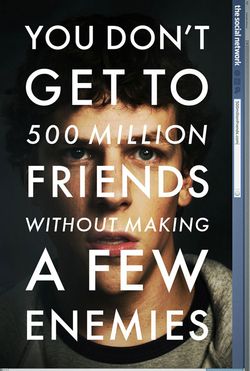 My husband and I went to see "The Social Network" this past weekend. Admittedly, I had mixed feelings about the movie. When he mentioned that he wanted to see the movie, I wrinkled my nose and sighed an "Oh no....Really?" Turns out he was most interested in the movie more because of it's soundtrack by Trent Reznor than the "story of Facebook," although that was an interesting aspect, as well.  Admittedly, the Reznor angle got me a little more interested, as well (Nine Inch Nails is one of my favorites).

The good news is that the movie wasn't as bad as I was anticipating it would be - the story is a mildly interesting one, even if Mark Zuckerberg does call it fiction.

It wasn't a horrible movie, but it didn't make me walk out of the theater thinking "I'm going to recommend that movie to everyone" either. The notion of it being a "picture of the year" candidate is laughable. It's certainly nowhere near that caliber of movie.

I like Facebook as much as the next person. Probably more if you consider the fact that I opt to use Facebook as a part of my job - in fact, I develop and execute the social media strategy, inclusive of Facebook, for EMC Corporation. But this is not a "picture of the year" candidate, folks. There is, frankly, nothing about this movie that screams picture of the year to me. I just don't get that notion. Not one bit. Are we "there" now -- where the fad of social media has everyone raving over a mediocre story? Really?

Putting aside the fact that we watched the process of website development for over 2 hours, and a bunch of teenagers teeter between loving and hating one another (not all that uncommon -- or interesting, either), and selfishly vying to be the "owner" of the next-big-thing -- what I did like about the movie was the wit in some of the characters and the moments when there was clever banter back and forth. Although the movie's "Mark" was a jerk in the opening scene, the banter back and forth with his girlfriend was amusing to follow. Do people really talk like that?

There were also even some emotional moments along the journey. I teetered between thinking Mark was a two-faced jerk and feeling sorry for him for for essentially throwing all of his friends away in the effort of claiming credit or owning the idea and creation of Facebook, or so the story goes in the movie. It's just sad, all the way around to see how people can fall apart under pressure.

So at the end of the day, I was entertained during some parts, bored or annoyed during others, and overall would say this wasn't a horrible movie, but wasn't great either. I'd say that the $22.4 million it brought in over the weekend agrees.